So Facebook randomly chooses pictures from his friends’ list and it is like a multiple choice exam wherein you need to select the name of the friend from the list. I tried helping him, and I was surprised to see my pictures (the one in bikini!).

That is quite an easy task if you will ask me, that is, if you only add friends you only know. His problem is that he has made his Facebook account like a Fan Page that he accepted all friends requests eventhough he doesn’t know the girls personally.

So the clever me has thought of a brilliant idea

I asked him to log in using 2 computers. One to verify and access his profile, and for the other pc – ask a friend to log in to Facebook and view his friends list. So I am getting bored at work so I decided to try this and help him with this dilemma.

I accessed his profile (with his consent) and I am ready to identify the pictures. I log in to my account using the other computer and opened his friends list. The first pic, some unknown girl on a swing. So the easiest way to do it is through elimination. I searched the first name on the choices – May

Arrgh.. I was unsuccessful on the first pic, and the Facebook page was not responding.

Sorry I have to repeat that!

Some thoughts.. What if friends tag you in a picture of someone (say picture of another friend just to share the picture with you) and Facebook uses this pic for your friend to identify?! Most of the pictures that were shown are tagged photos (yup, a photo of me in bikini and the other one, from a Children’s Party!).

So if your friend (say Pedro) needs to recover his account and needs to identify pictures, even if he/she (Pedro) identifies you (Juan) correctly in the photo, but the Facebook database has associated the picture with another friend (Amador), your friend (Pedro) would still not get the perfect 7 score to access his account.

I almost got impressed with the security features, but still.. FAIL.

If my game plan does not work, I have to ask my friend to register a new Facebook account and JUST ADD THE FRIENDS WHO HE KNOWS!

Some updates.. After an hour, I tried logging in and accessing the account.

Facebook only gives me two chances for the I’m not sure. 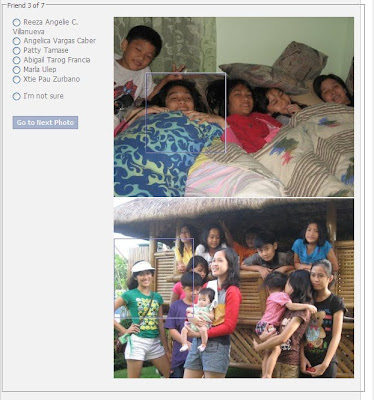 See this.. my sentiments exactly..

This is my biggest worry.. The Pedro-identifying Juan-but Amador was the one associated with the pic! 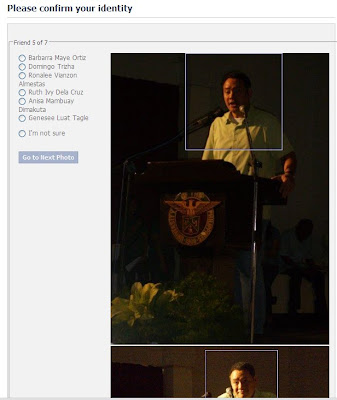 .. and I thought my friend is friends with Gibo Teodoro! But none on the choices!

I failed again. At least, there is hope. I will ask him to send a note to Facebook support and tell them that their security feature will not work. People tag their friends in other people’s pics just to share the picture (and the laughter!) – Take the picture above where Facebook used a tagged friend’s pic which happens to be Gibo Teodoro‘s picture.

What do you think? Other suggestions?!