Before midnight, I found myself sitting in a theater, watching the movie, Before Midnight with a friend on my left side and a box of Papa John’s pizza on my right.

Yeah, Papa John was my date last night. Before heading to the theater, I hung out with some co-writers in When in Manila at Papa John’s Tomas Morato. It is awesome to finally meet the people and faces behind the names that I only get to see in our Facebook Group. Most of them are talented people who excel in their line of work – nurses, photographers (Shayla! who did my Boudoir pictures!, social media experts, wine expert and  talented writers. And I got to see once again the usual gang – Cheryl, JoTan, Ivy,  (and the corresponding couples), Jason, Minette, Mae and Angel (who shared some fashion bloggers awesome #ootd secrets). I also finally get to interact with Aileen and Janelle (she’s a young stylist student, and she writes awesome fashion blogs!) Very awesome! So you wouldn’t be surprised that When in Manila won the Best Photo Blog award in the recent Globe Tattoo Awards 2013! Congrats Team! Thanks to Vince for making me a part of this awesome community!

Here I am with the awesome trophy! It lights up! Awesome! 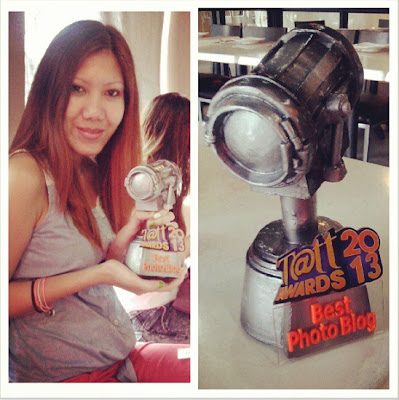 Anyway, it was a fun afternoon. I even had an intimate talk with Minette and Mae – who shared this interesting ThethaHealing session she has completed. It’s all about law of attraction, making the forces of universe work for your advantage and getting what your heart desires.

I would like to believe that the universe is good with me that everything that I attract, I get (in the right time). But I am also interested in this new discovery.

If anyone of you would be interested, there is a free consultation today happening from 4:00 PM to 6PM. Thank you Mae for sharing this!

I just realized that my Sunday was consumed with talks about relationships and attraction. While we are having an intimate session with When in Manila writers, we were shocked with the news about the death of Cory Monteith. It is shocking and tragic. To be honest, this is the first time I heard about Cory Monteith (as I am never a fan of Glee), but losing a talented, young performer makes me sad, and what makes me even sadder is the thought that he was supposed to be married with Lea Michelle.

I realized that a bride’s biggest worry is not if the groom will show up or not in the wedding day, but it is not seeing your groom ever again. I am not yet a bride but I am feeling the fear.

Before my friend and I went to see the movie, Before Midnight, we had a fun talk about relationships, dating, and crushes (yeah, crushes! I felt like a High School student). I missed that kind of conversation with my dearest friend. We talked about if sexual relationship is important in a marriage (what you think)?

Well, probably it is important – that’s the reason why most men find themselves in another woman’s bed. Probably, Donnie Wahlberg and Jenny McCarthy will best prove it right. Donnie Wahlberg (the NKOTB guy who gave me a hug during their Manila Concert) is dating Jenny McCarthy. I am heartbroken. Well, I am still hoping Donnie will soon join the Chippendales. Hehe.

Pic from Splash.
I know they look cute together.
After watching the movie, Before Midnight, I am more convinced that people should go with someone they can talk to for the rest of their lives. Someone who will not bore them, and someone who can make you converse more (doesn’t always have to be funny).
If you haven’t seen the Before Midnight movie yet, I suggest you watch Before Sunrise and Before Sunset first. And if you are the type who wants “action” in the movie and conversations bore you, this movie is not for you.
The movie series is now in my favorite movies list (probably next to Back to the Future – my all time favorite!). It was just two months ago when I found out about the film, and my friend Diane told me the story about it. How the first movie was first shown in 1995 (Before Sunrise), and 9 years after (Before Sunset) was released. Now after 9 years, the concluding movie has been released (Before Midnight). What makes each movie interesting is how everything happened only for one day but the characters’ conversations tackles so much topics.
In Before Sunrise, the theme is about self-discovery, spontaneity, and living in a moment. It makes me want to stay young and travel more. Probably I would also meet my Jesse. Ha! In Before Sunset, the characters talk about their lives, the missed opportunities, social and governmental issues. The topics were more matured. If they ended up together or not, I was clueless after the film ended rolling the cast of characters.

After a month of waiting, I finally got to see the film (I was not invited to see the press screening. Boo!!). Before Midnight  opened with Jesse sending his son off to the plane, and driving his family (Celine and their twins) to the vacation destination. Through a peaceful drive, dinner and long walks, the couple discussed their lives, and how they changed since they met, their worries and troubles about their career, issues and their expectations with each other.
I love the film, and how Jesse and Celine stayed true to their characters. Through their conversations, the viewers were given ideas on how they spent their 9 years, the trials and their struggle to stay together, their insecurities and expectations. If there is anything that I love about the movie, it is how they romanticize each other with their witty, meaningful conversations – conversations that only two people who really connect can make.

This movie has some “action” too (note that it is rated 16). I am not saying much now, you have to see it. Despite the wrinkles, lines and flabs, I still love this couple, and they still make me feel kilig.

I am not sure if after 9 years (both in real life and in the plot), a new Before.. series will show up in the movie theaters. I cannot tell. The makers cannot tell. This Before..  series is not a planned series anyway.  So..