The games that we play as a kid, not only reflect the kind of future we wanted then, but translated into who we are in the present.

Last Tuesday, I have seen three kids – Luna, Diego and Julio reminisce and thought of the things that they played as a kid to understand why they are the way they are.
The Games People Play, an Ateneo Fine Arts production written by Palanca awardee Glenn Sevilla Mas, played with my thoughts and memories while I watched the three actors play.

Luna (Thea Yrastorza) is the most thrusting girl who becomes a nun pursued by her most lustful dreams. Diego (Khalil Almonte) is a confused fatherless man hiding in a strong, manly front. Then there is, Julio, (Abner Delina) an effeminate boy who develops into an unhappy gay man. 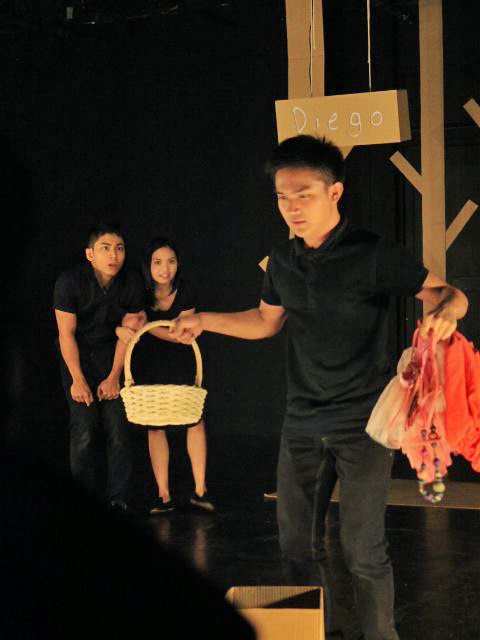 Three characters brought us to Antique province in the Philippines where they grew up believing in old folklore, played the same games we are familiar with and kept stories they chose not to share with each other.  An impressive change in tone, voice, expression and props by the actors smoothly transform each of them in to a new supporting character.  I am giving Abner a virtual standing ovation for an outstanding performance as Consuelo (Luna’s mom), and Khalil for playing doble-kara as Julio’s sisters. High respect to Thea who performed the role of Julio’s mom. The small stage became their big playground transcending the change in years and characters’ age. Accompanied by music that perfectly match each setting – the production was more than a play but a masterpiece.
Congratulations, Games People Play!

The Games People Play is a riveting, imaginative production. The story is gripping, hilarious for the most part, and tragic as a whole.
At the end of the play, it would make you revisit of your childhood and your inner self, and wonder how was the childhood of those people you met. Are they happy, and mostly positive; or harsh and devious? Maybe, it is because of the games that they play as a kid.
The writing of the play was inspired by this quote from child psychologist and writer Bruno Bettelheim:
“The monster a child knows best and is most concerned with [is] the monster he feels or fears himself to be.”
The production will run from April 22 to 26, 2014, 7:30 PM with a 2:30 PM show on April 26, at the Fine Arts Blackbox Theater, Fine Arts Annex, Ateneo de Manila University.
For ticket inquiries, contact John Yap at 0917-722-5399 or visit www.facebook.com/gppgamespeopleplay for more information.
Stay connected with me, subscribe to my blog!
If you like this post, click the like button or the Facebook Share button! Spread the love. Like my Facebook Fan Page at www.facebook.com/ruthiliciousblog or follow my updates on Twitter @ruthilicious.
If you are reading this post somewhere, it is originally written by Ruth and published in www.ruthdelacruz.com.
Games People Play Theater and Arts
Leave a comment