The Day I Met Aldub: Intimate Blogcon for Imagine You and Me Movie 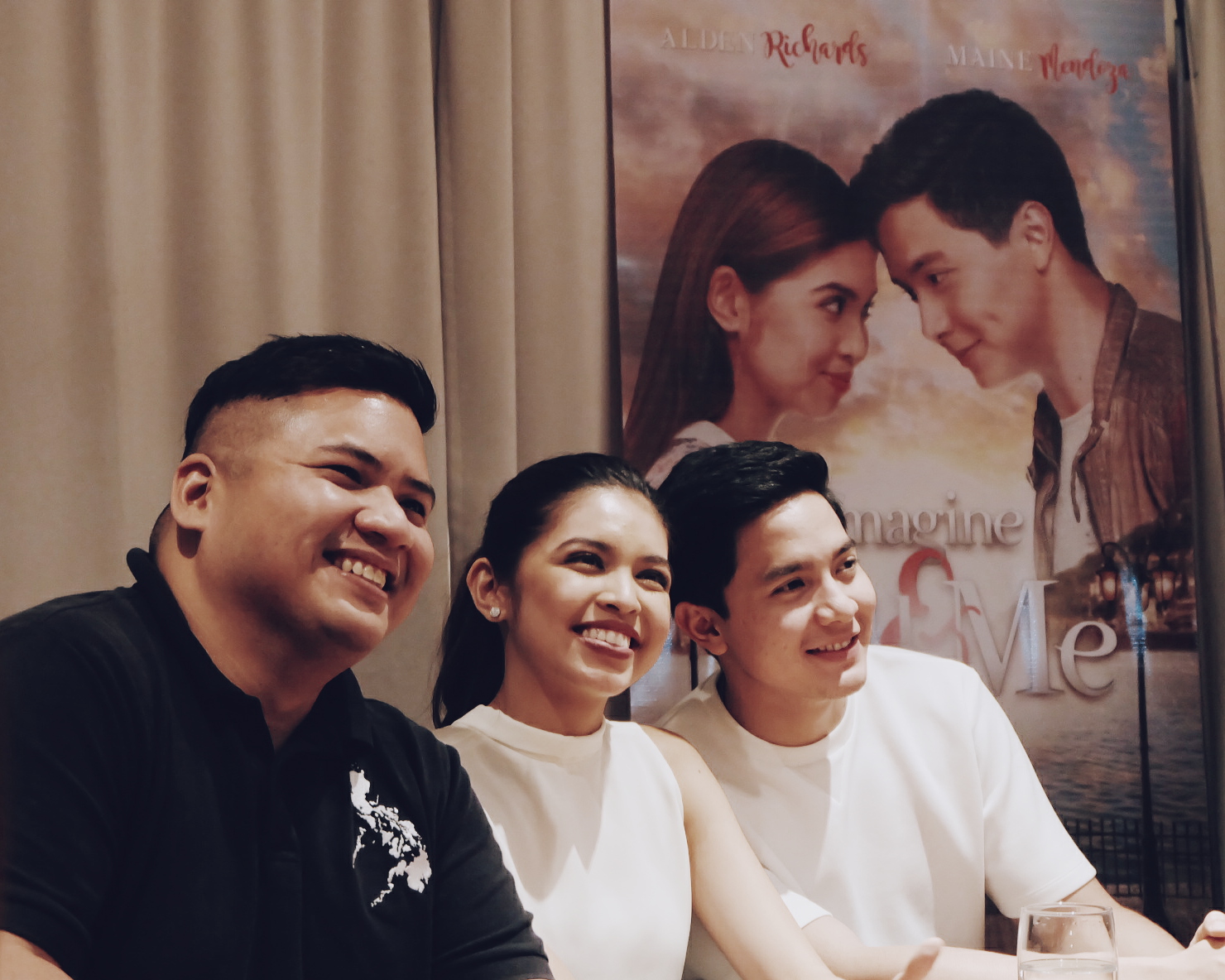 It is not everyday that you get a chance to meet a celebrity. And even if I have access to events where I can meet and greet most of the top celebrities in the Philippines, I chose not to attend them.

It was a different story last Sunday. An intimate dinner and blog conference with the phenomenal love team – Aldub – is something that I would not miss. Let’s count it towards one of my many once in a lifetime experiences.

I first met Alden a few years ago during his Birthday Build for Habitat for Humanity. He was not the Alden that we know now, but he is always very pleasant, fun and accommodating. My first encounter with Maine was during the Avon event. The PR team who is handling the account said that Maine had an emergency and needed to go ahead. But we were surprised when she came back for press photos. She is such a darling!!!
I prepared myself to the blog conference – I got my data ready, memory to record videos and battery to back me up. I know how showbiz events can be pretty tough and crazy (everyone wanting to get the best seats, best interviews and best photos). I was surprised with how organized and fun the intimate Blog Conference went.
I wasn’t aware that Aldub already arrived in the venue – there were no screamings, no mobbing, or whatsoever. The two settled in front with Director Mike Tuviera. I know deep down inside – we were all screaming at the sight of the two. Again, it is not everyday that you get to see big celebrities – and in this case, Aldub. 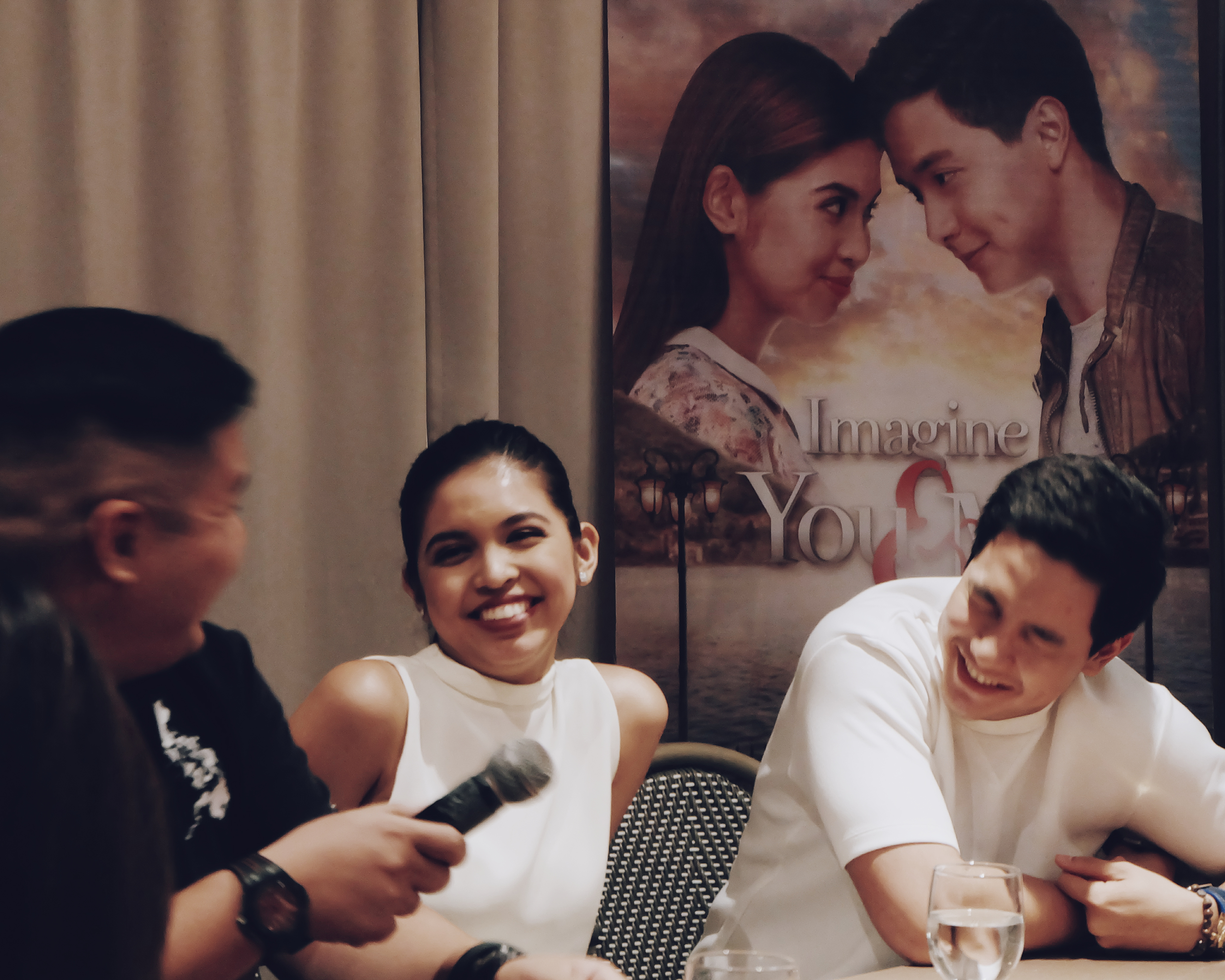 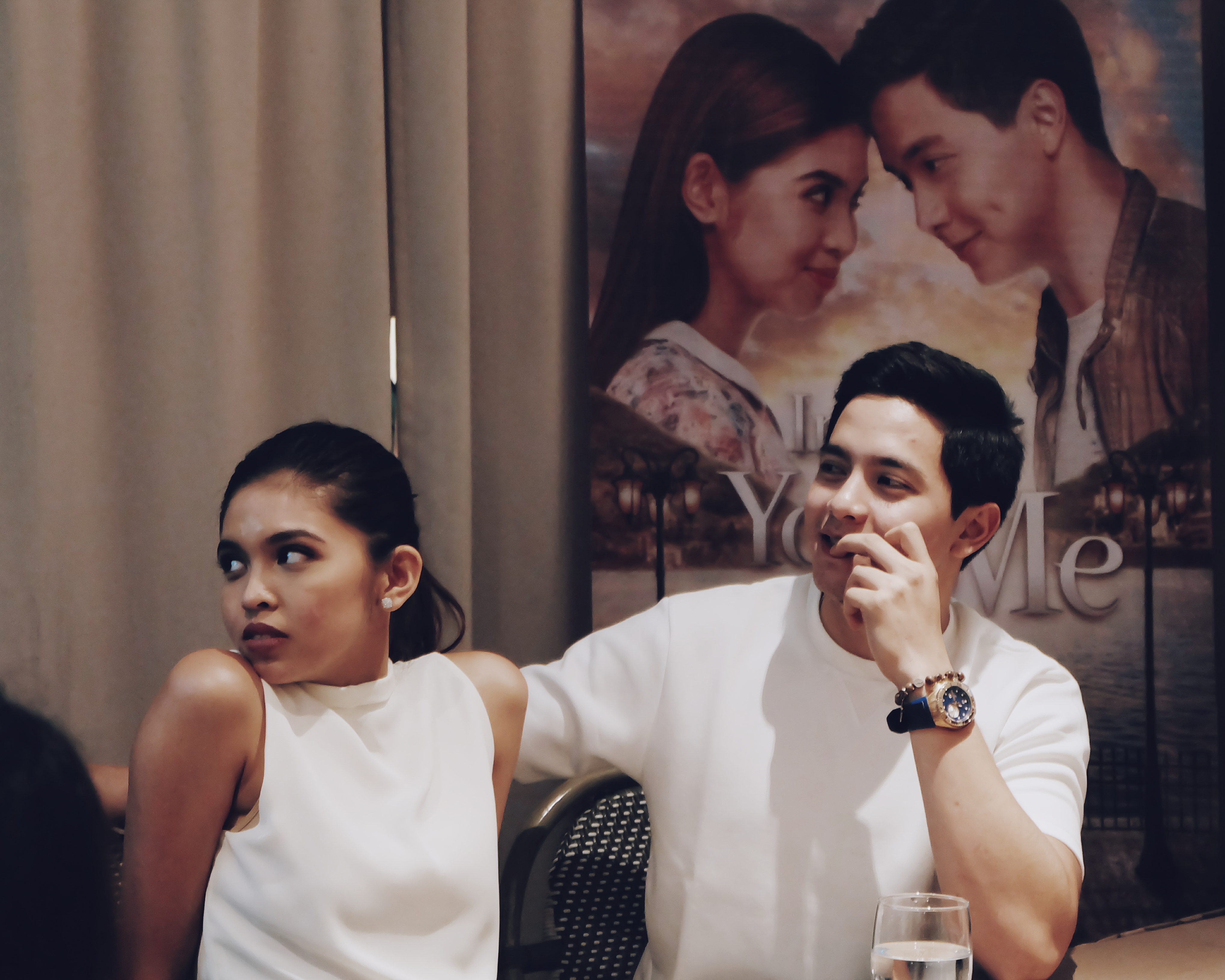 At some point, I got hooked at the Aldub Kalyeserye that I anticipated every single episode and Saturday specials. I love how the love team started, how Eat Bulaga make things exciting for the story, and how they engage in social media. More than anything, I love that the Lola’s taught (reminded) us of Filipino values that we tend to forget – old way of courting, waiting for the right time, respect for elders and valuing your worth.
The new movie, Imagine You and Me has no hint of the Kalye Serye in it. As much as Director Mike Tuviera wanted to pull some Kalyeserye and Eat Bulaga stars to make a cameo in the film, he decided not to (which I think is a good move). The movie was filmed in the beautiful location: Italy. It seems that Imagine You and Me would be like those films that would inspire you to travel. I know that after seeing the movie and setting foot at Italy, I would go crazy thinking about the scenes and how they were shot (very much like how I felt when I went to Barcelona and I remember the episodes of Meteor Garden. Haha).
Imagine You and Me is inspired by the director’s father who wished to film a movie in Italy. Maine was excited for the film as a big fan of Romantic Comedy films. Alden confessed that he was just a convert to ChicFlicks because of Maine’s good movie recommendations (imagine Maine laughing at the background and telling the whole world that Alden just recently watched the movie – A Walk to Remember – after xx years of his existence!). His favorite though is, Fault in Our Stars. 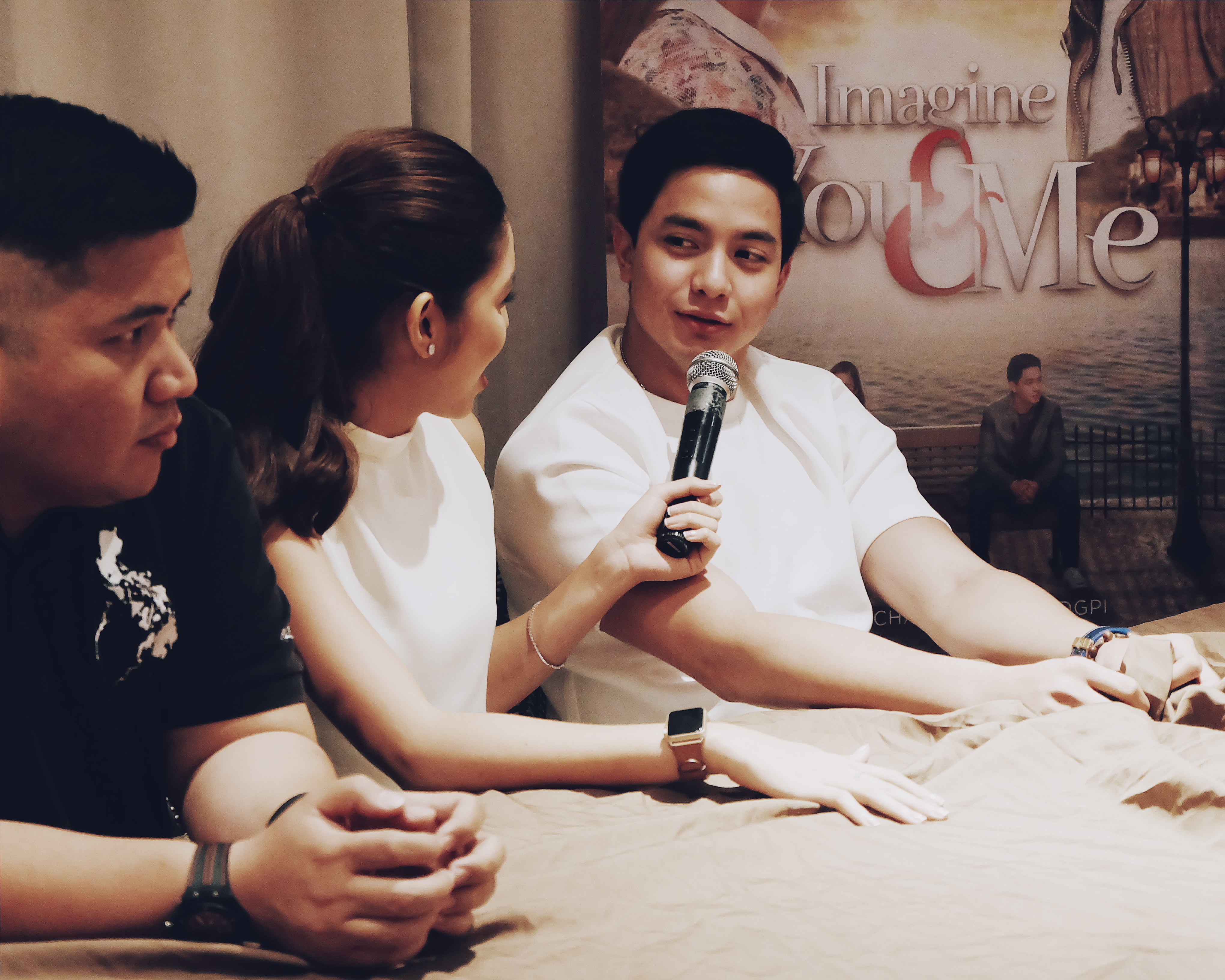 Maine shared how they struggled with the weather in Italy in shooting the film. While Alden openly shared that there was one scene when they had to film as if they were happy and too close (when during that day, Maine and Alden were having “tampuhan”). They stayed professional and they chose to settle their differences (because that’s what partners do, right?).
Director Mike was all praises to the Aldub as he shared how Aldub share their input in the film to make it even more relatable to the viewers. As Maine puts it,  “gusto namin yung may sakit”. The couple is very careful though not to give away movie spoilers. But if there is anything that we want to see is how Alden Richards executed the dramatic scene (how one tear drops from the right eye at the perfect timing at the right line). 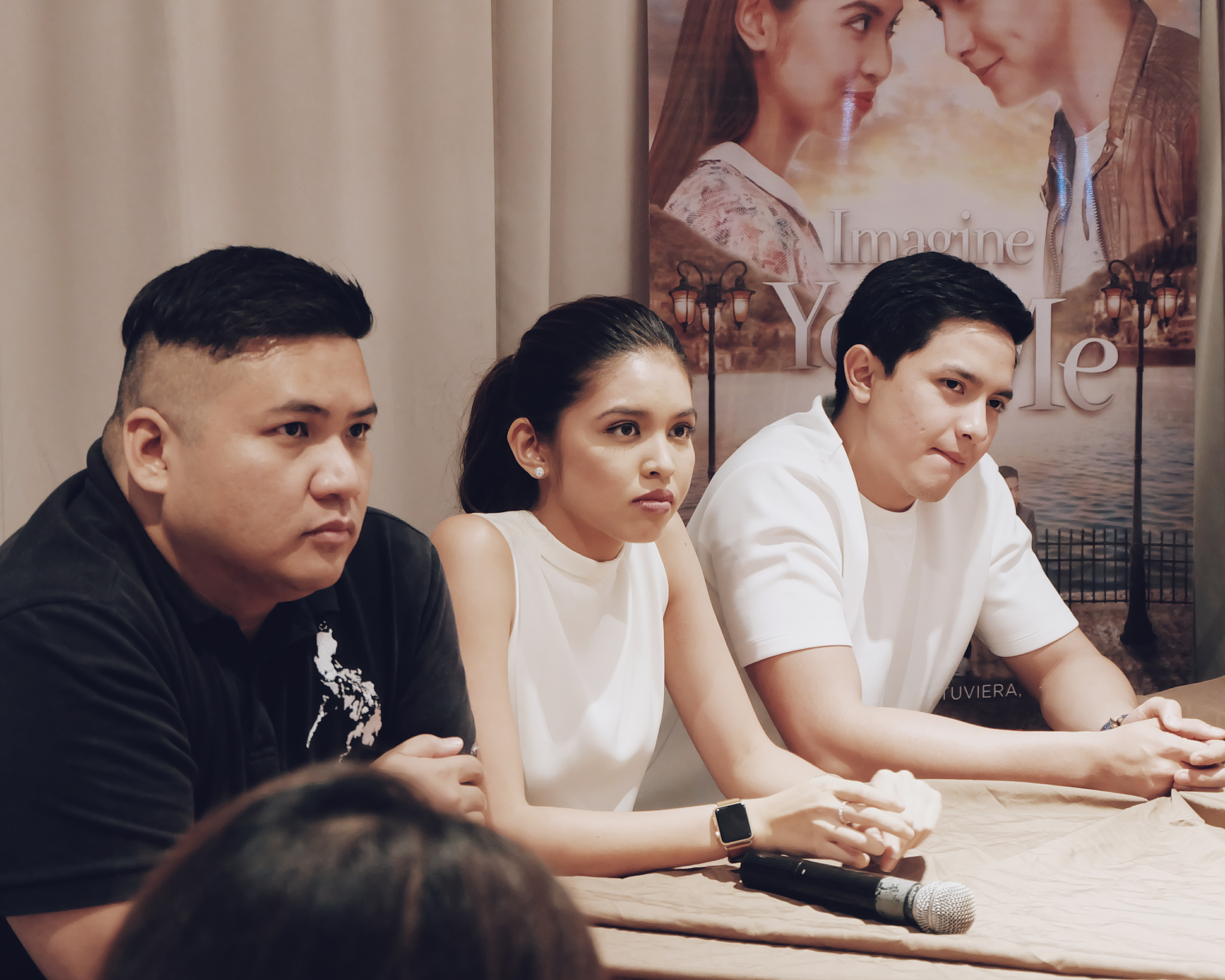 It would be Maine’s first dramatic movie (and she was still laughing at how she won the Best Supporting Actress!). I love how Maine is so talented and flexible – she can dance, sing, be effortlessly funny and make a thousand faces. I honestly do not have high expectations of her in this film. Seeing the teasers of the movie is like seeing a girl reacts on that very situation – kilig, happy, sad, disappointed. It is as if she were not acting and once again being Maine – being true to herself. 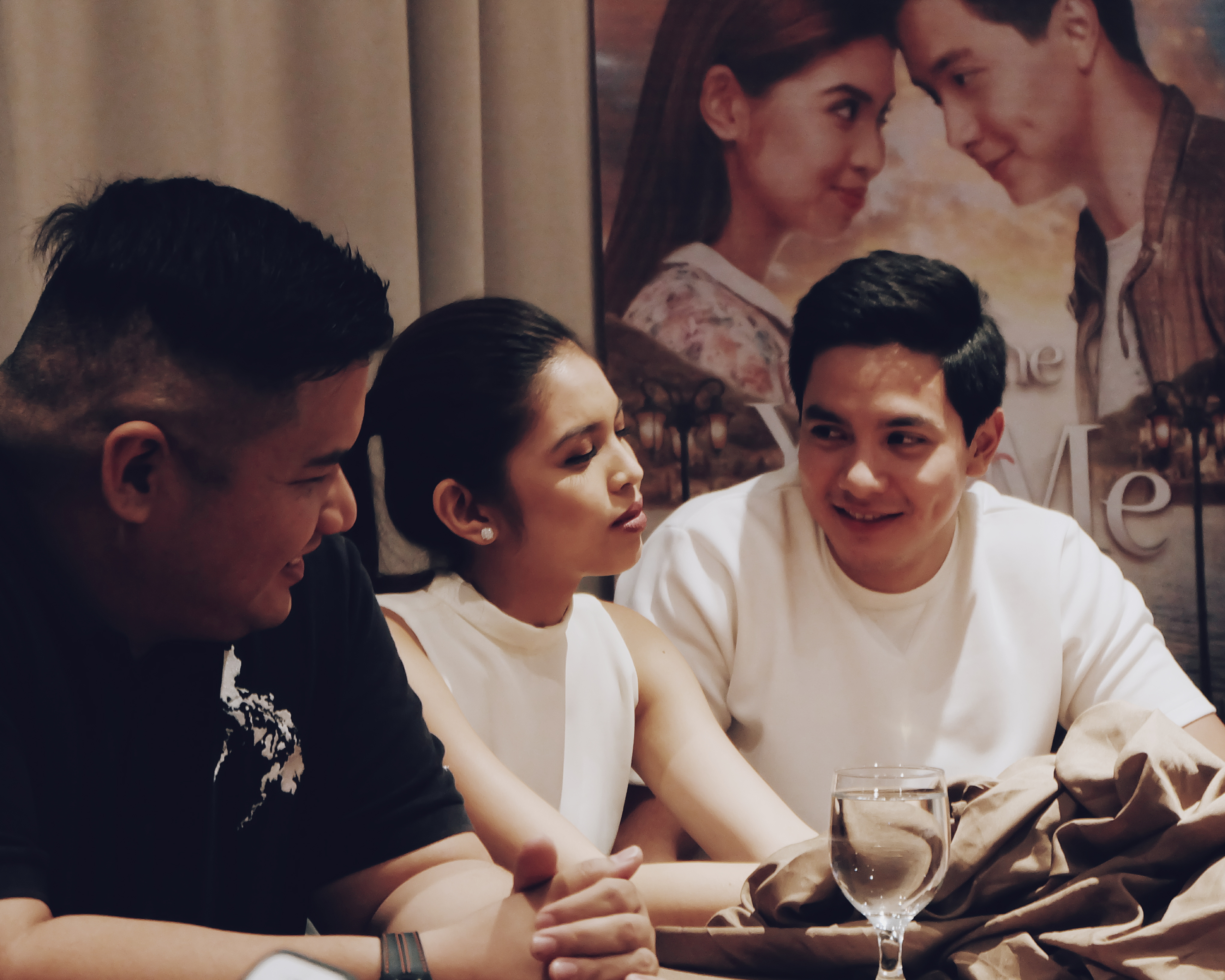 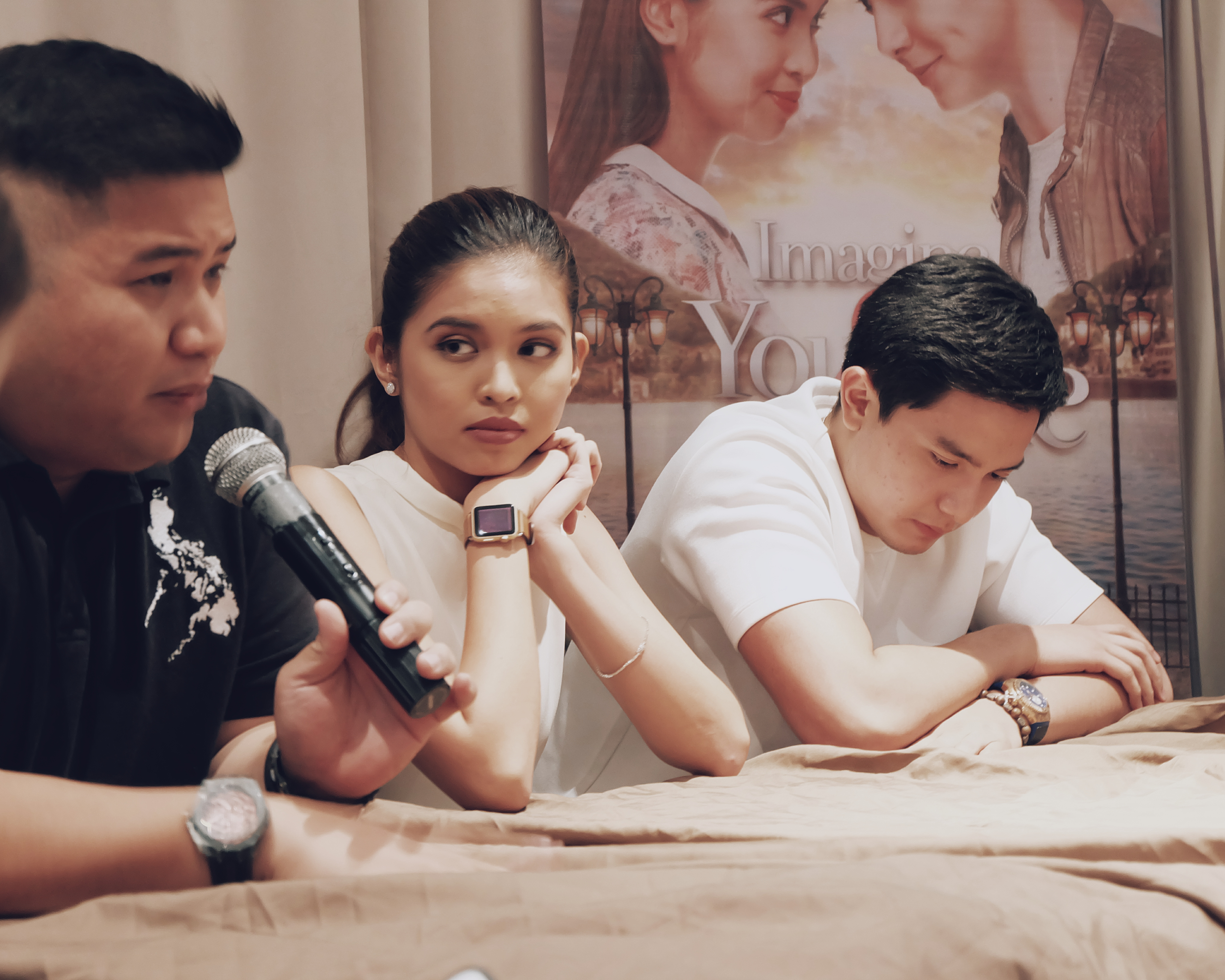 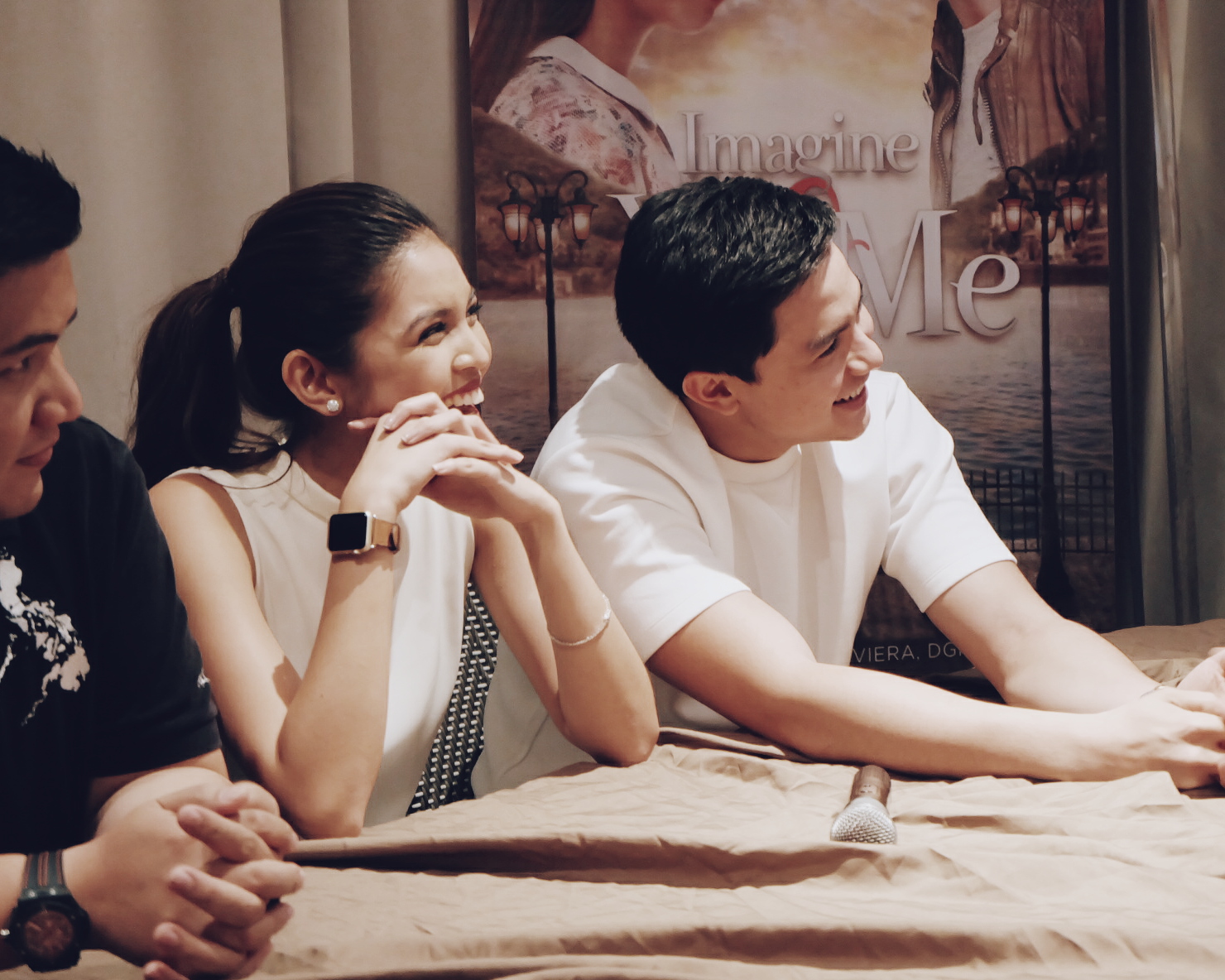 Maine admitted that she can be hard on herself and be pessimistic. Direk Mike would often praise her acting and work but she would feel the need to be better – until Alden assured her that she did do great (insert kilig smiley here).
Imagine You and Me is Maine and Alden’s special gift to their supportive fans who have been with them since Day 1 of Kalye Serye.
I know and I feel how supportive their fans are (thank you for all the RTs and faves whenever I share #aldub storiess). When asked what is the most touching thing a fan did for them? They said it is when they let them film the movie in Italy and wait for them every night. The crew asked the fans if they could NOT take photos during the filming and they did oblige. The Aldub then would meet and greet with fans every night at the hotel lobby. On the last day, the hotel even complained because of the surge of fans. The Italian crew who was with them during the filming said that they haven’t seen anything like that. They never knew how big Aldub is until they arrived in the airport.

Check out the videos I took and uploaded:

Maine and Alden may be BIG stars but they are also like you and me. They can be serious, funny and insightul, but they are always natural.
We were given a chance to meet and greet with them. I know how hectic their schedules are and I really appreciate how they stay nice, pleasant and accommodating during the intimate blog conference.
How hard it is to be 1/2 of Aldub? Very hard. And I know they are working very hard. Thank you for the time, Maine and Alden!
Catch Imagine You and Me in theaters on July 13th.

**Thank you to Carlo Ople and Eason de Guzman for having me.
I didn’t include watermark on the photos, but please do provide a link back to this post or mention me @ruthilicious if you wish to share them in social media. I would greatly appreciate it 🙂

For more exclusive events, check out here.
Don’t miss me. Subscribe to my blog here and receive updates from me straight to your mailbox.
Alden Richards Aldub Event Imagine You and Me Maine Mendoza
Leave a comment

For business proposals and love letters, emal me [email protected].com.