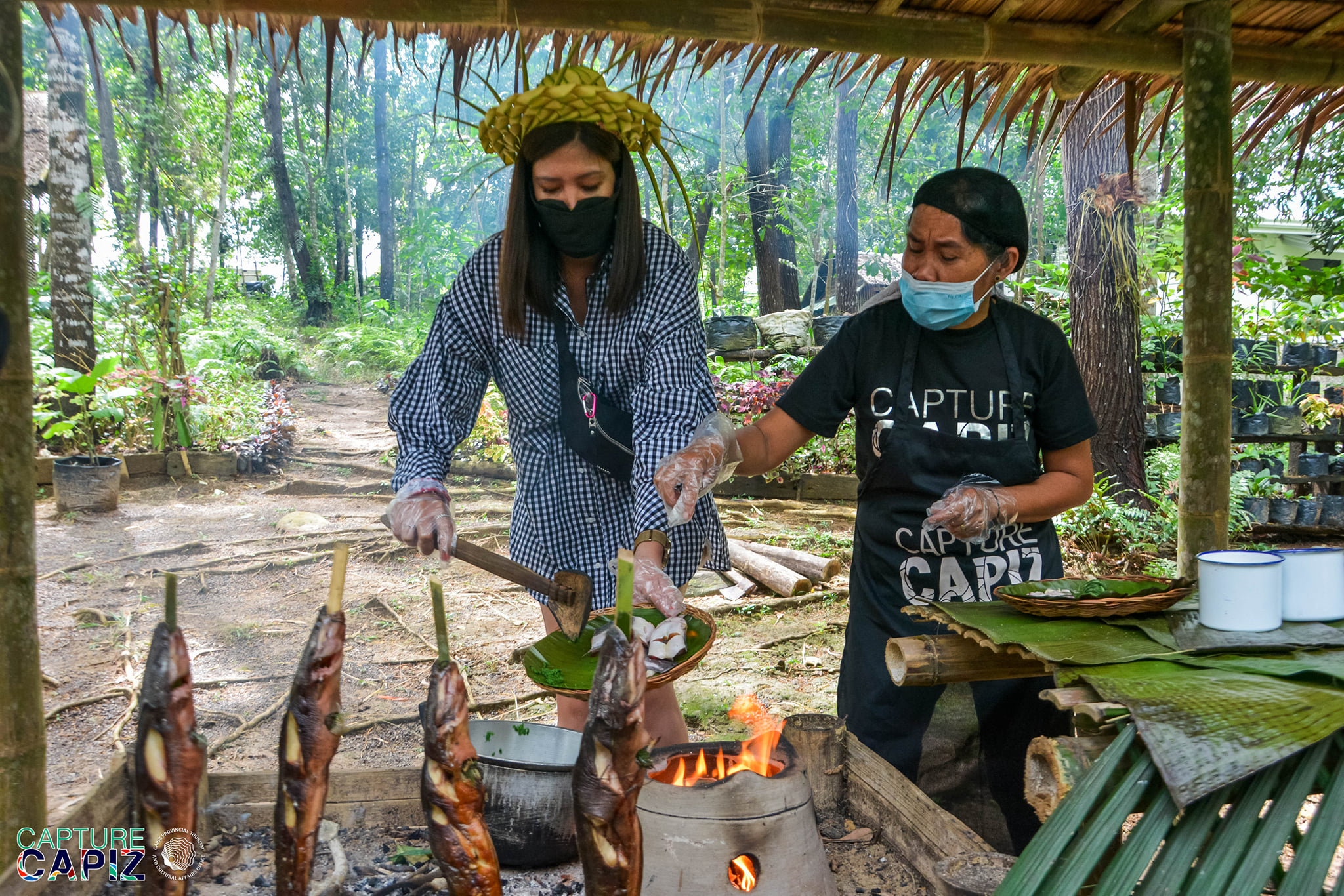 Capiz, known as the Seafood Capital of the Philippines is part of the Panay Island in Western Vizayas, and is the next stop for our Panay Island Trip with the Tourism Promotions Board.

Aside from the rich fishing grounds in the country, Capiz is also a home of historical places and cultural traditions. Everything about Capiz is truly captivating, and I wish we have more time to spend in and explore the destination.

We visited the Capiz Eco-Park and Cultural Village, and we only needed to spend half day to learn more about Capiz, its people, traditions, and delicacies.

Here are the things to do and enjoy in Capiz Eco Park and Cultural Village.

When we arrived in Capiz Eco Park and Cultural Village, we were welcomed with sombrero gifts and pulseras (they referred to it as a friendship bracelet). We also indulged in local delicacies like rice crispies and kreopek (made with rice flour).

As a sign of gratitude during our travel to Capiz, we also left a little gift to the Capiz Eco Park and Cultural Village, and planted a tree.

We explored the village and learned about the locals’ way of life in the early days. I indulged in little performances that they prepared for us. One that stood out for me is the poetic joust in the Hiligaynon dialect that tests the wits of the participants. This is one of the things to do in Capiz.

While, one touching moment for me is meeting a Binukot. Binukot is a cultural practice where a young, beautiful woman (as young as 3 to 4 years old) is kept from the public eye. She is prevented from doing heavy work and is not allowed to be seen by men. She is pampered by family members and is taught various oral folklore, traditional dances, and embroidery. At the age of 13 or 14, when she is ready to marry, her parents would then ask for a big dowry.

During our trip, we met one of the last Binukots in Panay Bukidnon. The Binukot tradition is no longer practiced, but the history is shared in the cultural village. They say, they are happy to see us, and they couldn’t wait to share the stories with their families; and it is the same feelings for me (us) who traveled to meet one of the country’s greatest treasures. There was a moment in this trip when I teared up.

During our stay in Capiz Eco Park and Cultural Village, we also got to experience cooking Capiz’s traditional dishes. We also indulged in local delicacies that they prepared and cook for us like the Bicho-bicho, Inday inday and Ginataang Halo Halo. The locals are so warm and they wanted to make sure we left full. Just like visiting a relative’s home, they even offered to pack food for us.

Some of the lovely ladies even experienced the traditional Harana – a Filipino tradition of courtship. It is a romantic gesture wherein a man opens her feelings to a woman through a song, as he stands underneath her window at night. They say that when the woman likes the guy, she would open her window and provide light through the lampara.

For the kids at heart like me, we battled in the Bao Race or Kadang Kadang. It is also known as Tiyakad, wherein a coconut husk is used to carry one’s self and outrun the other players. I had a lot of fun racing against Apple, Andrew and Ms Erlyn! It has been ages since the last time I played on the ground, and it was nice to have this interaction again with fellow fun-loving travelers.

In the late afternoon, we visited Maria’s Aquafarm located in Barangay Culajao. It is a beautiful farm and flower garden. We learned more about the Bangus business including catching, harvesting, and deboning.

They prepared a lovely dinner for us and served the freshest seafood spread. We were joined by Governor Estevan Contreras for dinner.

You can see more photos from the trip via the Capiz Tourism and Cultural Affairs Facebook Page.

We stayed in Istorya Forest Garden in Poblacion, Ilaya. It is a quiet and intimate resort.

In the morning, before heading to Aklan, we visited the Panay Church. The church is declared as a National Historical Landmark and it houses the largest bell in the country. What makes the church more interesting is, it is made of coral blocks and is 70 meters long. A nice venue for future brides who would want to walk down a long aisle.

Capiz truly captured my interest. I know that this won’t be the last time that I would visit the Seafood Capital of the Philippines. Thank you for these amazing experiences Capiz and @tpbphils!

7 Reasons I Fell in Love with Iloilo