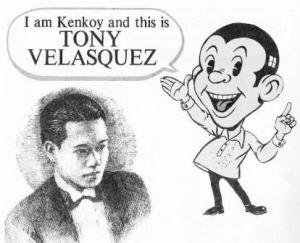 I got a note yesterday morning telling me that Kengkoy wants to get blogged and featured in my blog. It is no joke. Although Kengkoy is known for being amusing, and his name was later on used as an adjective to describe a witty and funny person (and yes, the adjective Kengkoy was oftentimes used to describe me!).

I am not certain if the youth today know Kengkoy?! But there is no need to go to the National Library to search for old clippings of comics. From the retail shop that relieved the works of Larry Alcala‘s Slice of Life, Solo would soon launch the greatest work of the Father of Philippine Cartoons, Tony Velasquez’s KENKOY.

Kengkoy, the amusing character created donned a trademark hairdo of slicked back hair which is probably the most recognizable look of Francisco Harabas, more popularly known as Kenkoy. Influenced by the Western culture, Kenkoy was garbed in suspenders, charol shoes, and baggy pants.  His language also became fashionable among the youth at that time, which was a mixture of Spanish, English and Tagalog.  Thus were born Kenkoy’s trademark lines like “Halo, how is yu?”, “watsamara” (what’s the matter), “dats oret” (that’s all right), “nating duwing” (nothing doing), “okidoki” (okeydokey), “lets tek ewok” (let’s take a walk), “is beri nesesari”, and “bay gali”.


Antonio “Tony” Velasquez, the Father of Philippine Cartoons, who has created 300 cartoon characters, created Kenkoy way back in 1929.  He was born in Paco, Manila on October 29, 1910.  Long before the era of the movie stars and showbiz celebrities, there already was a Philippine pop icon named Francisco Harabas, more popularly known as Kenkoy. As Tony Velasquez described him, “He is always pusturyoso”. He was a debonair and his trademark fashion sense was Western influenced: decked in suspenders, charol shoes, double breasted suit, baggy pants, a sailor hat, and a slicked back hairstyle.  Kenkoy is considered the most influential comic strip in the Philippines and most successful because of the wittiness and humor, as well as his antics, colonial way of thinking, and carabao-english. Kenkoy gained massive following that he was adapted into movies in 1950s-60s and musical act in early 90s.

I was able to see the collection and I am sooo excited! There are His and Hers shirt (perfect for lovers!), dog tags, dress, romper, watch and even a lighter! I want to buy them all!

Another exciting part is that Solo is looking for new faces as models so it is launching its 3rd Online Model Search which would be unveiled in 2012.

If you think you have the face and embodies the Solo image, check out http://www.solo.com.ph/modelsearch2011 for more details.

Ooopppss… The spirit of Kengkoy reminded me that we are giving away a dog tag to one lucky commenter!

Just comment below and let us know what do you think of the new collection or which item you would want to buy and win this Kengkoy dog tag worth Php445!

Please don’t forget to like my Facebook Fan Page too to get updated! No strings attached! Okeydokey!