I dropped dead as soon as I got home yesterday. It was a fun and productive day. I attended 3 events – all happened in Pampanga. If someone will ask me to describe it, it is heart-warming, motivating and fun.

I was late for the 7:00 AM call time but the team was kind enough to pick me up somewhere in EDSA on the way to Pampanga. I worked until morning while nursing a painful lower back. But I felt that my energy bar was in full. I seldom attend events but I just couldn’t say “no” to an event invite by (who else), Comms Team of my employer, IBM Philippines. I filed for a leave, and I am just happy that I have such a supportive management team (well, I can worry about my deliverables later, but I have already worked earlier this morning). 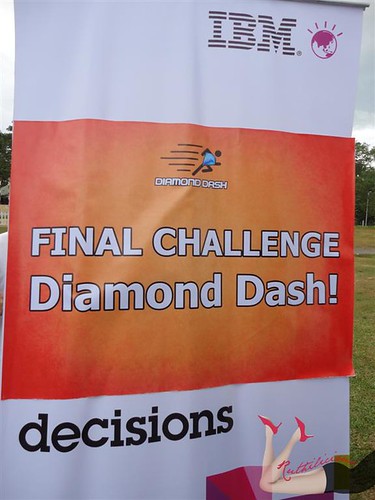 Back to the story yesterday, I boarded the van with friends from CyberPress and Jeman (blogger friend). Traffic was smooth and easy, and the only commotion I know that morning was the boys raving about and praising the iOS and bashing Android. I seldom visit the Northern part of Luzon, and I am amazed with how the roads, buildings and cities are being developed.

Our first stop was at the Sampang Bato Elementary School. We were advised that we would be donating KidSmart Computers and we would teach kids a few lessons! The last KidSmart Donation activity I attended was the one in Indonesia. But I got more excited when I found out we will be teaching Aetas friends!! As soon as we arrived, we were greeted by the school principal and kids who rendered a really cute song for us. 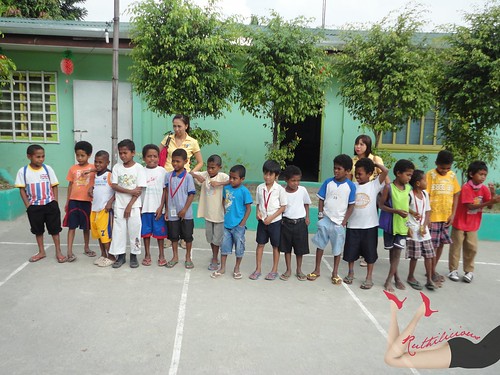 As we assembled the computers and prepared for the big lesson (I was assigned to teach English together with Jeman and Kristl), more volunteers and media friends from CyberPress came to the venue. Our friends from IBM External Comms were really impressive with the way they talk to the kids and conduct their lessons. We, however, try to entertain our group as we get to know them while waiting for the computers to boot up. 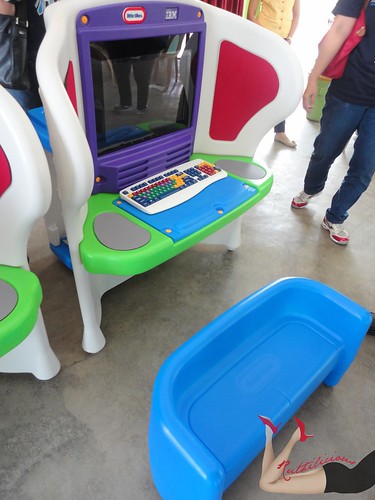 One member of the IBM CSC Phils 12 that I facilitated is one
of the developers of this KidSmart Computer! 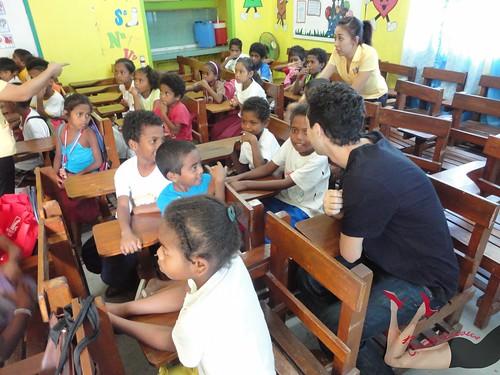 He was the star that day. He is awesome!

As soon as lesson starts running, I saw sparks and interests in the kids’ eyes. Probably the same spark I had when I first used a Family Computer. So we read lessons, sang ABC song, and run a contest – of course, we had treats for the kids. I loove how they show enthusiasm and interest that some of them are a little competitive. 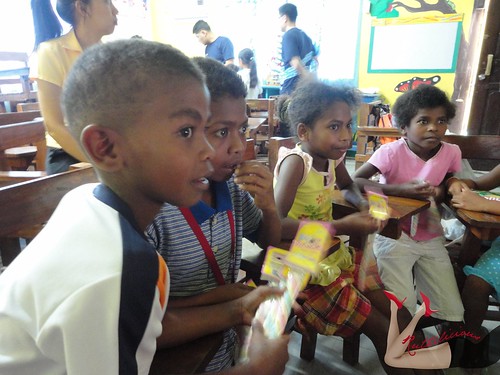 There is, however, one kid who felt really shy during the whole session. I told him to not let the opportunity pass to even touch the computer. I am sharing with him the lesson I learned that we should not let an opportunity pass – and that we have to make our own opportunities! I felt proud when he stood up and clicked the mouse! 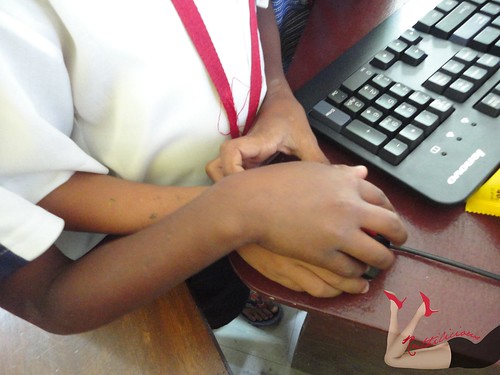 This is a cute sight! Everyone wants to experience and touch the mouse!

I asked Mr. Principal how they will handle the Education Session using KidSmart, he said they are planning to do it by batch, so all the kids would have the opportunity to use the computer.

After an endless camera clicks and photoshoot, it was time to say “goodbye and thank you” to the wonderful kids of Sapang Bato Elementary School. I asked them if they are happy, and they said they are – and  I gave each one of them a High Five! 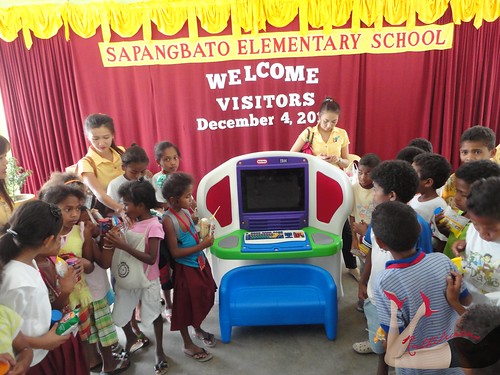 I then again, found myself inside the van on the way to the ribbon-cutting ceremony of IBM Pampanga. The new office follows the opening of a new branch in Davao earlier this month and is part of the company’s commitment and continued geographic expansion initiative to increase presence in the fastest growing markets in the world.

When IBM Country General Manager Mariels Almeda Winhoffer arrived, she greeted everyone with a kiss. Our media friends were wearing the 75th IBM Anniversary shirt, and she commented how she love to see them wearing it. She is always so happy to see friends from the media supporting and witnessing IBM milestones. 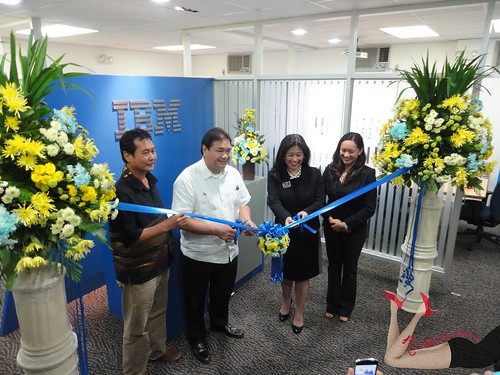 We then transferred to the Holiday Inn, Pampanga where we had a really good lunch with media friends. Mariels then talked about how fruitful 75 years was for IBM Philippines.

She is always passionate about how IBM becomes an essential company to the nation and to the world especially that our business is not for consumers. She said that our media friends are witnesses that what we are announcing are not product launches, but more of projects that would help the communities. I wish we could share with everyone the growing expansion and partnership with local governments, but it might be too soon 😉 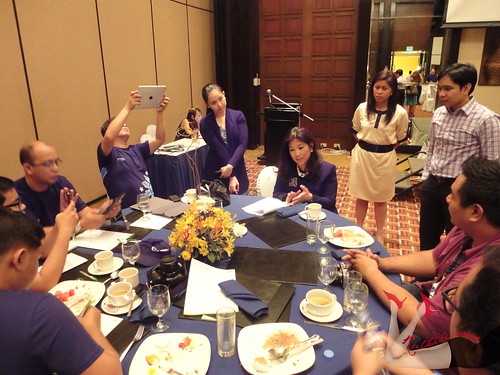 Mariels also talked about the IBM Corporate Service Corp. IBM’s CSC program, often referred to as a corporate version of the “Peace Corps”, is an innovative employee development training program which places teams of IBMers into emerging markets for one month projects. The employees are there to support local socio-economic development and in return have the chance to broaden their skills in emerging markets.
I am always proud to say that I am part of that program (and I love how Owen uses his favorite press release about me and IBM CSC – Thank you Owen!). It is one of the experiences I will never get tired of sharing. Btw, I have transferred my blog about IBM CSC experiences in www.ruth-goes-to-makassar.blogspot.com. I am also happy to say that I am the facilitator for the IBM Philippines 12 who were deployed in Cagayan de Oro this year. They worked with local government such as CHED, and they all had fun and amazing stories about Philippines!
Mariels also sat down with  media friends and personally thanked them, and answered their questions. I seldom see this kind of gesture from presidents of big companies. She is really amazing.
You knew it, after the event, we had more photoshoots. Then back to the van, we went to Clearwater Beach Resort. It was too unfortunate that two bloggie friends (Jeman and Alexie) had to go back to Manila to attend another event (thank you Jeman and Alexie, really, really, really appreciate your support!).
The set-up, tarps and the sight of videoke machine made me nervous! 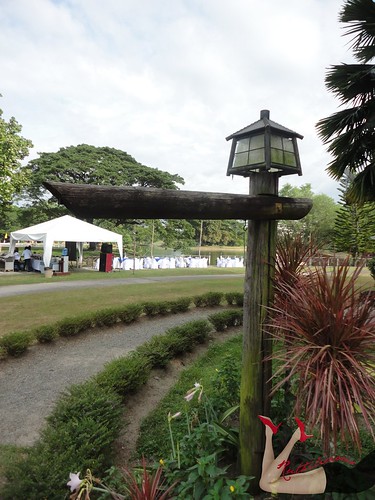 After we changed to a “sports” attire, and appreciate the resort’s facilities and great view, it is time to form a team. 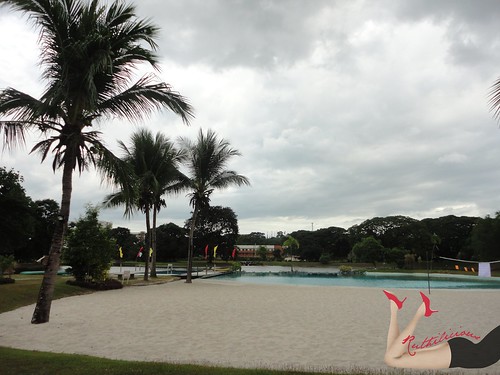 Look at that white sand..
During the Drafting, I was picked by Lope (wuhoooo!!!), Chief Technologies of IBM Philippines. The other teams were led by big bosses from IBM Philippines.

So we were the Blue Team together with another member of CyberPress and Albert. 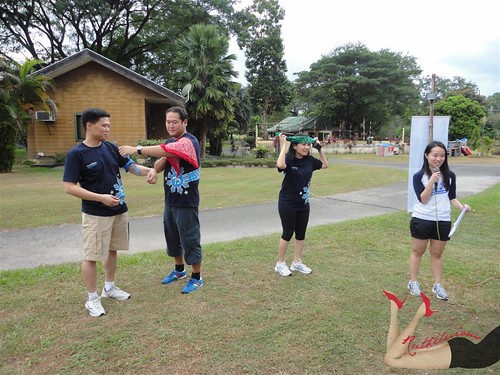 It is my first time to join an Amazing-Race like activity, not counting our sports fest called Mobilympics. I am impressed with how they organized this event – utilizing all facilities in the resort, coming up with fun rules, and having everyone (even the big bosses) join the event. I love that the event is just pure fun, and nothing physical.
So members were asked to “row a boat”, tweet about the event, sing, ride a bike, and run! 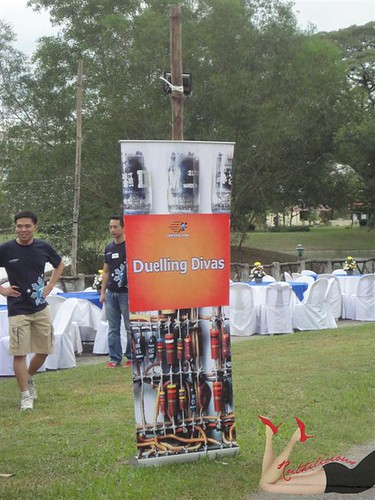 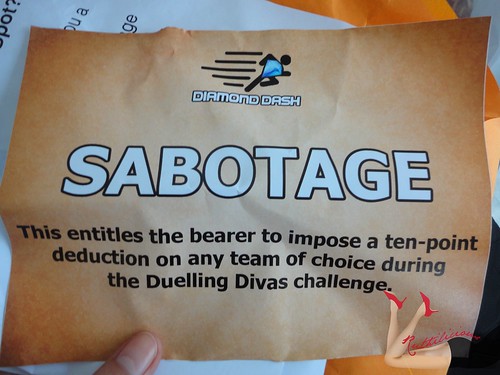 We got this at the start of the game and we were able to
“sabotage” Red Team during the Dueling Divas!
I am glad that everyone in the team did a part in each challenge! I loove how the London Bridge is Falling Down was sang! Rock and roll style! My contribution, a simple tweet, can be found here.
I was telling Lope that I am okay not winning the game, as this is, afterall for our media friends. But, we won it! Fair and square! 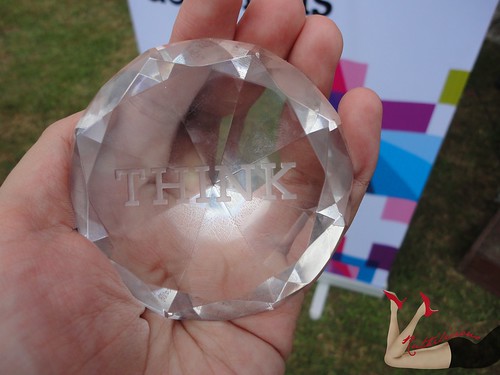 I am surprised to even get awarded with a prize! I am all for giving it all to our media friends, as I am an IBMer anyway 😉 We won an over-night stay in Clearwater Beach Resort! Wohooo!! Thank you. Thank you. Bow!

Here’s the second place winners – all joyous when they were also awarded the same prize! Congratulations! 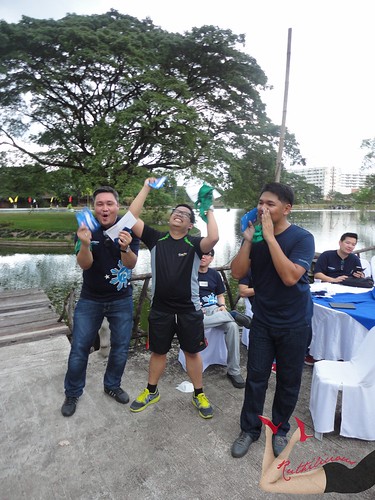 Jimbo of Summit Media, JM of Interaksyon and Paulo of Daily Inquirer
After the awarding, it is time to eat again! This is one of the few events that I never felt hungry! We had awesome food and BBQ for dinner. It was nice sitting in that peaceful place, with a beautiful view. I wish I have like a resthouse like this. The peg last night was “Dawson’s Creek”.

The topic last night rolled from Sting, concerts, boybands, geo-expansion, traveling, Ramadan and how fun the event was. Last year’s event was held in Enderun College – read about it here.  I also got a chance to get to know our interns who are so enjoying their work – thank you for choosing IBM! 😉

After the event, media friends were once again gathered as Lope discussed updates regarding the smarter planer initiatives in Davao. Using IBM’s Intelligent Operations Center (IOC), the PSSCC will have a centralized dashboard view that will allow the city to monitor events and operations in real time. This comprehensive view will enable officials to better predict and plan for potential issues. 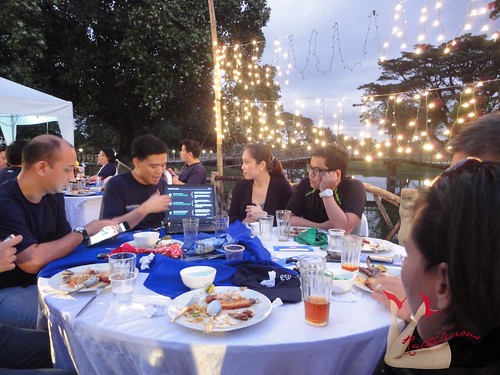 How it will work? It is a little technical for me to explain, but let me try. First the video analytics will be so intelligent, that say, you can place a red mark in the parking lot, and if the CCTV captures a car crossing that line, it can report the incident real time – enabling the central control to take action. This is aside from retrieving recorded videos – say, retrieving only recorded videos with red car, etc. You can learn more about this partnership here.

It is nice to understand these things, especially that we have such a huge business. Working more than 8 hours a day, can only give me much understanding about the work that I do, so it is nice to listen to experts and understand how we conduct business, partnership, or basically, just help in building a smarter nation and planet.

And during this time, I feel more little.. and my contributions even simpler. At least, it gives me a new challenge to face. But the bigger challenge would be to catch some zzz’s and wake up later, and face my inbox.

Thank you again to IBM Philippines, and to the IBM External Comms Team for organizing this event and inviting me. Thank you to our friends in media, social media and Cyber Press for the continued support and for making this day fun!

If you are reading this post somewhere, it is originally written by Ruth and published in www.ruthilicious.blogspot.com.
IBM Pampanga IBM Philippines Personal Work
Leave a comment